BREAKING NEWS
Home Daily News An Historic Agreement in Paris? What does that mean for the price of oil? 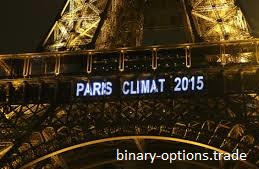 An Historic Agreement in Paris? What does that mean for the price of oil?

Over the weekend, ministers from 195 countries from around the world announced an historic agreement to abandon fossil fuels by the end of the century and limit global warming to 1.5 degrees. This is truly a landmark agreement which has come at the end a near decade of diplomatic shuffling following what was largely viewed as an embarrassing showing by many of leading countries in Copenhagen in 2009.

The ambitious goals laid out in the Paris Agreement call for “finance flows consistent with a pathway towards low greenhouse gas emissions.” The subtext of this global consensus on the need for a cooperative approach to the challenge climate change presents is, put simply: Fossil fuels (read Oil) are going the way of the dinosaurs.

Through the agreement is non-binding, sanctions cannot be applied for violations, this global commitment demonstrates that at the very the dialogue is moving towards green energy.

One of the key goals of the agreement is to lower the amount of greenhouse gasses released into our atmosphere. According to the report from the International Institute for Sustainable Development and the Nordic Council of Ministers, if only 20 countries removed subsidies on fossil fuels greenhouse gas emissions would drop by 11% by the end of the decade.

What does oil go from here?

The news may only get worse. The Wall Street Journal quoted prominent analysts on what the agreement might mean for the future price of oil.

PKVerleger LLC: “One year ago almost to the date, Saudi Arabia’s oil minister Ali Naimi asked a key question: ‘Is there a black swan that we don’t know about which will come by 2050 and we will have no demand?’ Saturday the world answered his query with a resounding yes. Whether countries will follow through on the agreement is debatable. Even so, the long-run future of oil and gas just got bleaker.”